A) to biotinylated HLA-DR4peptide complexes at a final molar ratio of 1:4 as described [41]. T cells had been incubated with tetramers for 4 hours at 37uC followed by 20 min incubation with cell surface markers: anti-CD3 PECy7, anti-CD4 PE-Texas red (Beckman Coulter, Palo Alto CA. USA), anti-CD45RO FITC, anti-CD62-L PECy5 (all from BD Biosciencies. San Diego CA. USA) on ice before washing with icecold buffer. Tetramer and Ab binding were determined utilizing an FACS Aria II flow cytometer (BD Biosciences).Raw ELISPOT information was analyzed by Kruskal-Wallis test with Dunn’s Many Comparison Test to examine numbers of IFN-c spot forming units (IFN-c SFU) among splenocytes of mice immunized with peptide and control mice (vaccinated with adjuvant only) upon stimulation in vitro with different assay antigens (T1BT, T1BT-Y, T-1; QNT-5, QNT-Y, T1 and HA30618). Anti-repeat antibody titers were analyzed with Mann Whitney test.Within a earlier study we described two overlapping YYA-021 HLA-DR4binding epitopes inside the universal CD4 T cell epitope T from ” P. falciparum [39]. MHC and T cell interactions have been described for T-1, an epitope close to the N-terminus on the T peptide (CS32738, YLNKIQNSLSTE). A second epitope termed T-5 (334SLSTEWSPCSV344) was mapped close to the C-terminus with the T peptide, but was not totally characterized. Preceding publications that analyzed antigen-specific CD4 T cell clones isolated from DR4 individuals vaccinated with a synthetic peptide vaccine (T1BT)4-Pam3Cys located that a number of these clones recognized “8874138 the core SLSTEWSP sequence contained in T-5 [36,38]. To perform a fine mapping with the C-terminal epitope, and to analyze side-byside its HLA-DR4-binding interactions with those of T, T-1, and handle tight-binding viral peptide HA derived from influenza heamaglutinin, we synthesized a series 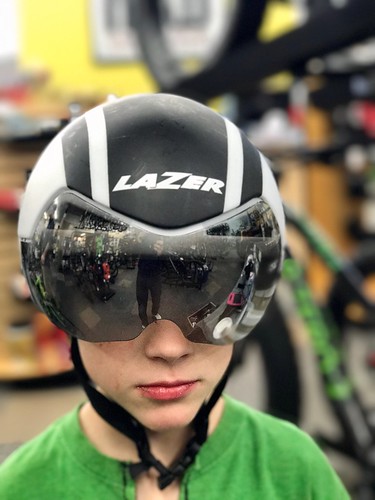 of peptide variants based on QNT-5 (332QNSLSTEWSPCSVT345) (Table 1). The QNT-5 peptide corresponds towards the T-5 sequence elongated by two and one particular residues in the N- and C- terminus with the core respectively. We performed binding competitors assays involving biotin-labeled HA plus a set of unlabeled single alanine substitution analogues and truncation variants of QNT-5. IC50 values for these peptides are shown in Figure 1A and Table S1. Alanine substitution of L335 or S340 greatly decreased binding of QNT-5 (as indicated by higher IC50 values) with smaller sized effects observed upon substitution of E338 and P341. These effects are consistent with a binding frame in which L335, E338, S340 and P341 from the QNT-5 peptide Figure two. Dissociation kinetics from DR4 of HA, T-1 and QNT-5 peptides measured in presence and absence of HLA-DM. (A) Aminoacid sequence and place of T-1 and QNT-5 epitopes in T. (B) Characterization of your dissociation behavior of peptide MHC complexes formed after 72 h of complex formation. The curves shown represent single or double exponential decays that match the information. Filled symbols represent the decays values of the 3 DR4-peptide complexes inside the presence of HLA-DM. Empty symbols represents the decay values of your complexes in the absence of HLA-DM. A representative experiment from 2 experiments performed is shown (each time point was carried out in duplicate).Published benefits from Sant and other individuals recommend that immunodominance in CD4 T cell responses is mostly an intrinsic house of peptide-class II complicated stability that may be modulated by manipulating MHC-peptide interactions [22]. The unstable behavior DR4/QNT-5 led us to predict that it wo