with membrane-impermeable biotin. Biotin-labeled cell proteins were captured using streptavidin-agarose beads. The precipitates were PubMed ID:http://www.ncbi.nlm.nih.gov/pubmed/19712481 analyzed by Western blotting with the DR4, DR5, DcR1, and DcR2 antibodies. Our results showed that neither the level of DR5 nor the levels of DcR1 and DcR2 correlated with TRAIL activity in compound-sensitized cells. We did not detect any DR4 cell surface expression in MDA-MB-435 cells. It is most likely that TRAIL induces apoptosis in MDA-MB-435 cells via its binding to DR5. Based on these results we concluded that the tested compounds do not affect the level of both DR5 and DcR1/DcR2. Thus, we conclude that the target protein of both ML100 and NSC130362 is involved in TRAIL-mediated apoptotic signaling downstream of 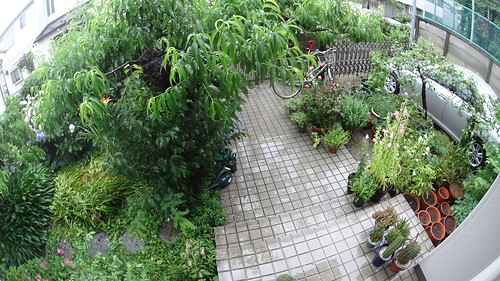 the TRAIL/TRAIL death receptor binding event. NSC130362 bound to and inhibited GSR activity To identify the protein target of NSC130362–the inhibition of which caused the observed cell death in cancer cells–we used pull-down chromatography. First, we coupled NSC130362 and a control compound, thymidine via available hydroxyl groups, to an epoxy-activated resin. Thymidine was selected as the control compound because its structure resembles that of NSC130362. Compounds were each immobilized on a solid matrix support in alkaline conditions because these conditions favor covalent bond formation between hydroxyl and epoxy groups. Coupling efficiency was approximately 50% for both compounds as determined by measuring the compound concentration in the flow-through solution after coupling. The compound concentration was estimated by absorbance PubMed ID:http://www.ncbi.nlm.nih.gov/pubmed/19713490 at 300 nm. The resulting sorbents were used for isolation of the NSC130362-binding proteins from MDA-MB-435 cells. MDA-MB-435 cells grown to subconfluency were washed and lysed. Equal aliquots of the lysate were chromatographed on each column. After washing of the columns, the bound proteins were digested with trypsin, and digested protein fragments were analyzed by MS. Among the 221 proteins that bound to NSC130362 column and did not bind the thymidine column, GSR was a likely candidate for the protein factor responsible for the observed phenotype. 11 / 26 Discovery of a New Component in the TRAIL Pathway Fig 4. Cell surface expression of DR5 and DcR1/DcR2 in MDA-MB-435 carcinoma cells. MDA-MB-435 cell were pretreated with either ML100 NSC130362 for 4 h and 24 h. Cells were then labeled with (-)-Blebbistatin web biotin and lysed. Labeled cell surface-associated DR5, DcR1, and DcR2 were captured by streptavidin-agarose beads. The precipitated samples were analyzed by Western blotting with the specific respective antibodies and horseradish peroxidase-conjugated secondary antibodies. The level of the cell surface DR4 was below the detection limits. Molecular weight markers are on the left. doi:10.1371/journal.pone.0129566.g004 To confirm binding between the GSR protein and NSC130362, the direct binding assay was developed. This assay was based on the similar absorbance spectra for the GSR protein and NSC130362 which have peak values around 280 nm. In this assay, two components were mixed, incubated for 30 min, and desalted to remove the unbound ligand. Thus, if NSC130362 binds to GSR, it will contribute to an increase of absorbance at ~280 nm in the flow through after desalting column. Fig 5B shows that addition of NSC130362 to GSR caused a concentration-dependent increase in absorbance at 280 nm. The data confirmed that NSC130362 indeed binds GSR and its binding affinity is modera